I’m sure you find it hard to believe I wasn’t the easiest child to raise. One of my parents’ challenges was getting me to eat. I remember Mother exclaiming, “You’re just going to blow away!”

I believe mac ‘n’ cheese was their go-to when fried Spam with brown sugar or salmon patties failed to entice me to clean my plate. Let’s just say I “outgrew” that stage, but mac ‘n’ cheese remains high on my favorites list to this day.

Months ago I read about the Portland Mac ‘n’ Cheese Festival advertised for October 21. Here’s the conversation that followed:

Me to Mauri: What would you think about spending $45 each to attend the Portland Mac ‘n’ Cheese Festival?

Me to Mauri: I’m serious, I think we should go!

He was a hard sell. Normally he would ask: Will there be people there? and if the answer is yes we think again and stay home. But we were ready for an adventure now that we’re BOTH retired! 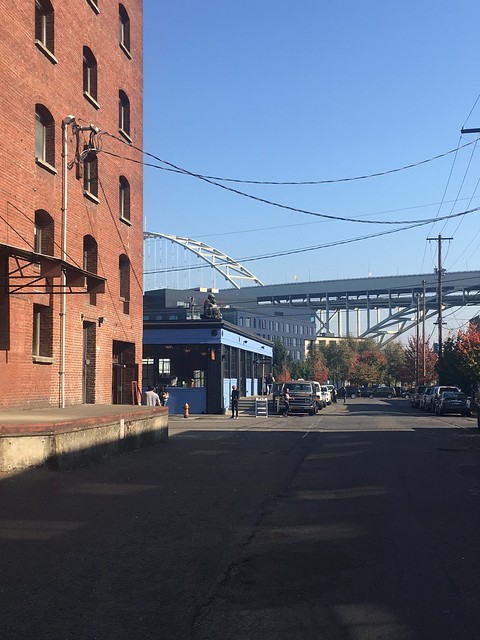 They picked a gorgeous, blue-sky fall day, and our drive to Portland was especially scenic. 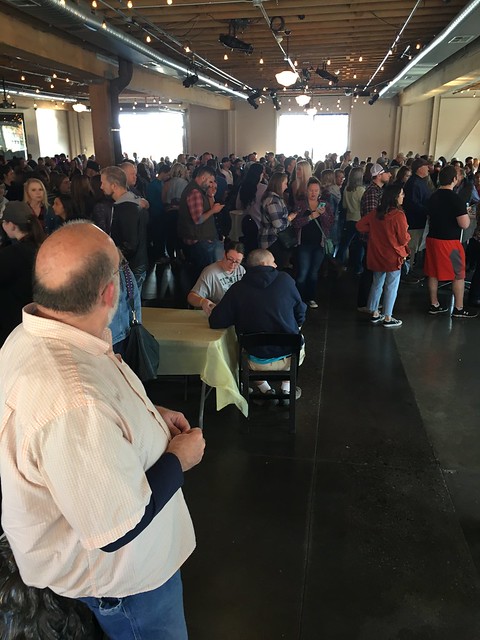 We traded our tickets for a wrist band and were given three drink tickets each and one macaroni shell to drop in the jar of our top pick of all the restaurant mac ‘n’ cheese offerings. After that we were left to fend for ourselves. Do you notice — there were people there! So many people just standing in lines we wondered what we’d gotten ourselves into.

Once we figured out that l-o-n-g line was for drinks, we found our way to the first tasting opportunity. Then the second, third, fourth . . . and by then we’d gotten the hang of the event. 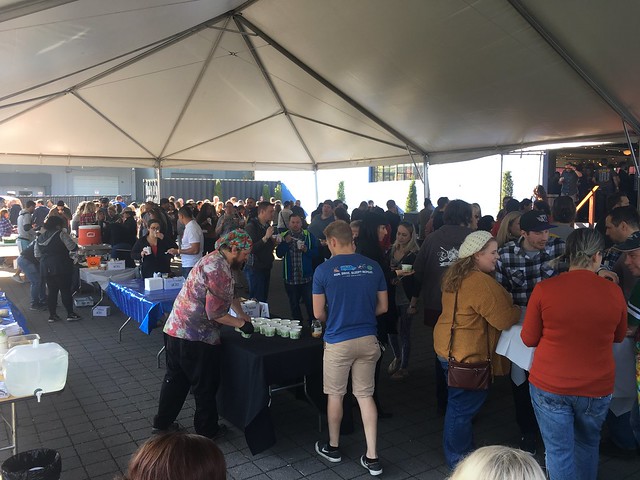 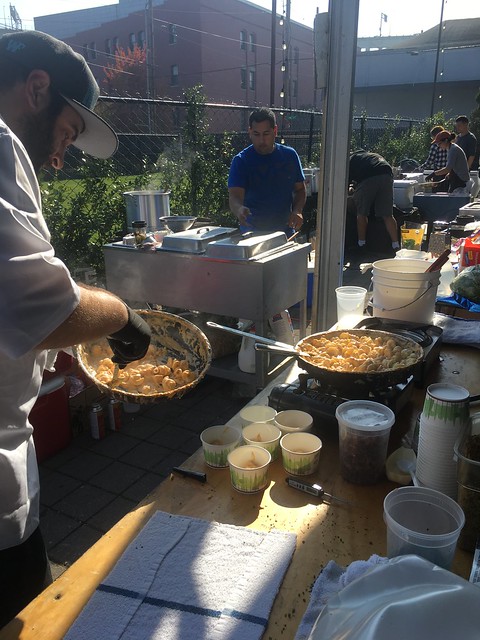 We could finally relax once we found a quiet corner and started to feel at home. 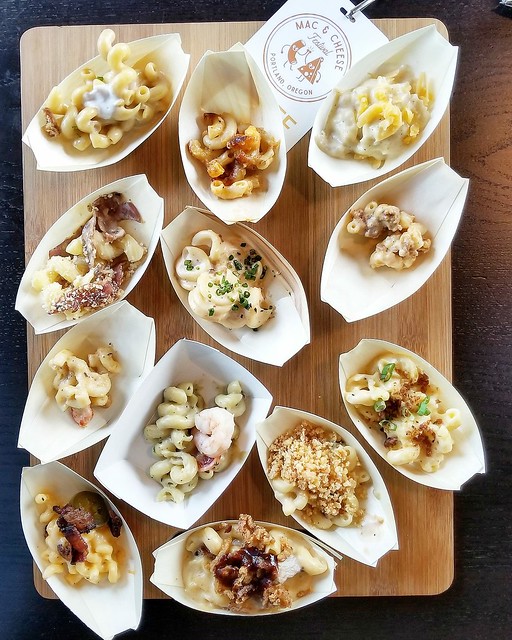 This isn’t my picture but one I pulled from the event’s Facebook page later in the day. It gives you a good look at what we tasted. Mauri has a much more adventurous palate than mine — the words habañero and jalapeño make his eyes sparkle. 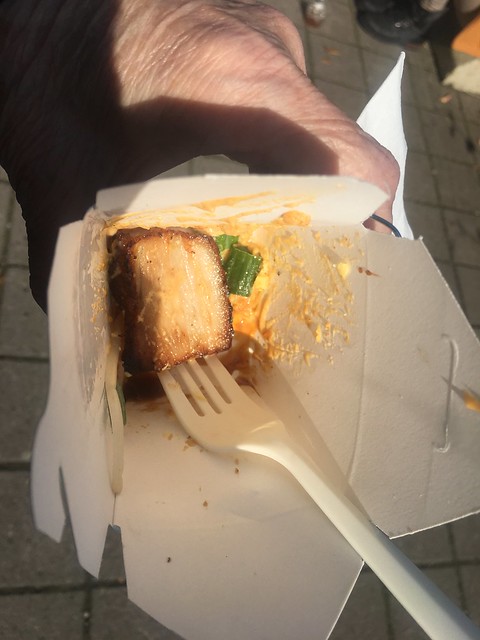 But we both say yes to seconds of the Asian recipe that included a slab of pork belly and egg wedge along with sprouts. 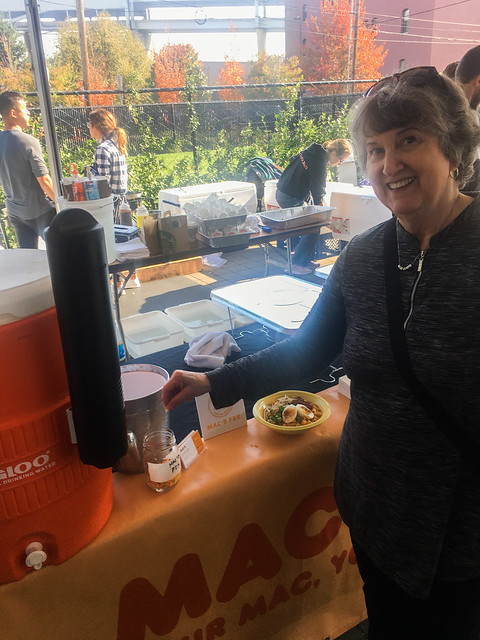 That was our pick! 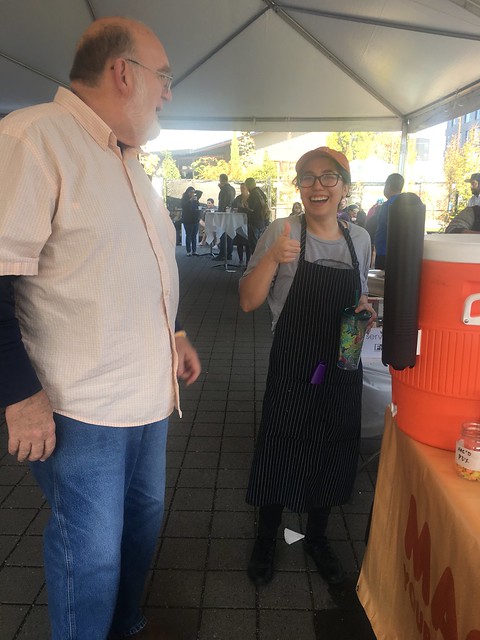 It was her creation, her idea! Mac’d didn’t win the event, but we are fans. Next time we’re due for another mac ‘n’ cheese adventure, we’ll just go straight to Mac’d’s and fill our bellies for a whole lot less than $90!