i took a scenic walk down memory lane

Some things go without saying but also bear repeating. (You can quote me on that, though it sounds like something Yogi Berra would say.)

I LOVE pictures! Maybe it’s because they maintain my memory or maybe it’s simply because they’re just so much fun.

My sister, Carol, forwarded an email from a friend who told her about the “You know you’re from Wheaton, IL, if . . .” Facebook page. I searched for it and asked to join. An hour later I was accepted, inviting me to join in conversations. One of the first posts was about the Wheaton pool, where I turned into a prune every summer day of my childhood. Others had already shared Wheaton Pool memories that matched mine in many ways. I even remember what candy I bought at the concession booth (usually Slow Poke or Junior Mints). And pictures! Someone posted pictures of the pool I’ve seen so clearly in my memory (without help). How cool is this? I can feel the sun-heated concrete burning my feet, the required rubber swim cap hugging my head, the life guard’s whistle when we got too rowdy. 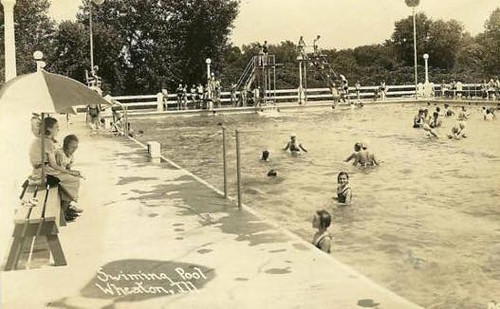 I added my two cents to the conversation then a note to someone whose name I recognized that went something like this:

Me: Are you Barbara’s brother? If so, we were neighbors.

Bob: I am Barbara’s brother.

Me: I’m Sharon/Sherry Nill a few houses down Forest Avenue from you. [then uploaded this pic of Barbara and me to trigger his memory] 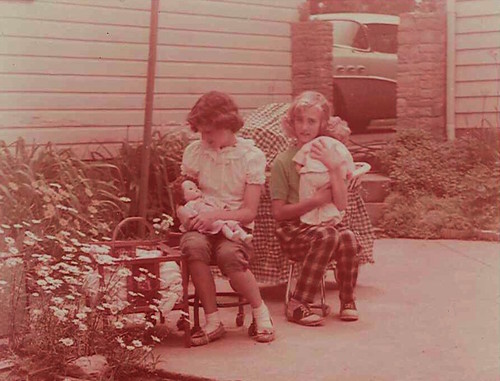 Me: This pic shows how beautiful she was/is. [flowered shirt] 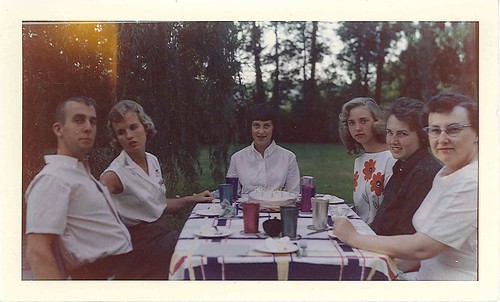 Bob: Do you know this person? 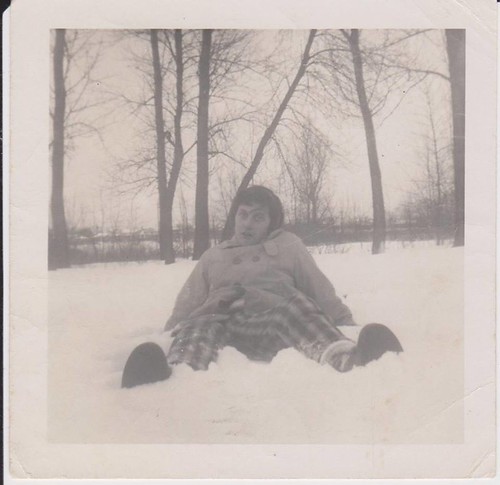 Me: Are you kidding me? Now it’s my turn to say Wow! It looks enough like me to be me! 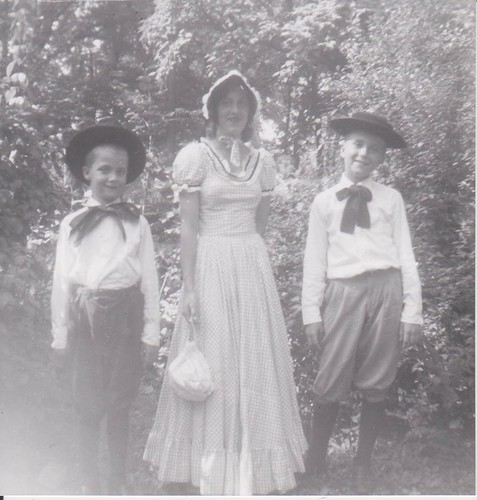 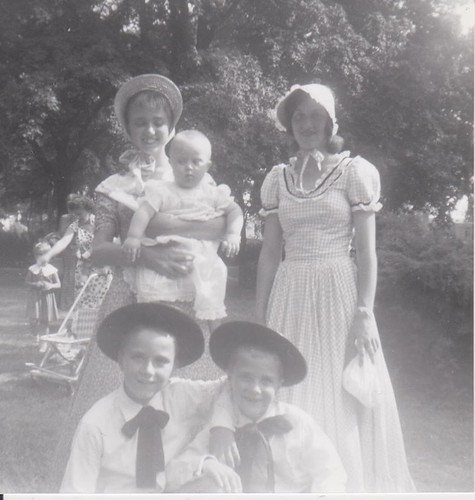 Bob: This is with you and my sister Barbara [and baby brother David]. 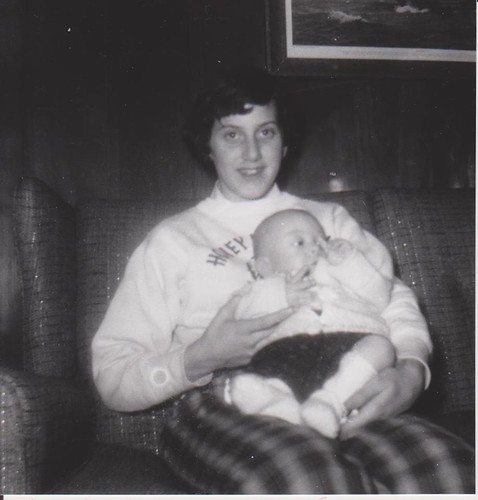 My heart stopped. A photo of me holding my buddy David! When he was born to the Bencinis I felt as though I’d just gained a brother. But in those days families were advised to institutionalize their Down syndrome (“Mongoloid” at the time) babies, and David’s parents complied. Lois was given a shot to dry up her milk and left to grieve. Thankfully, her mothering instincts won out and David went home where he belonged. I was at the age for budding instincts, and I grew very attached to David.

I was a year ahead of Barbara in school, and by high school she and I had drifted toward other friendships. The Bencinis moved to Wisconsin and we lost touch.

All these years later, Facebook reconnected me to Lon, oldest of Barbara’s three brothers. Try to imagine my joy when he posted this picture of David with their mother! 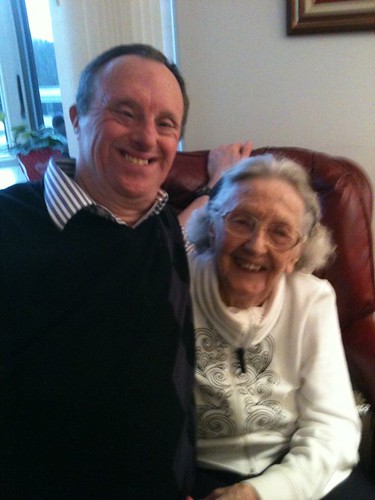 And this one of David with Barbara! 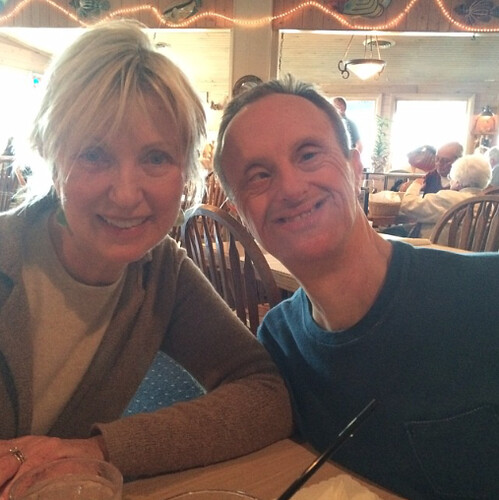 Seven years ago Barbara wrote “David has turned out to be a great blessing to our family. He was always a delightful, loving person, graduated from a special needs high school, and worked in various sheltered workshops. My mother was so right on to take him home from the Mark Lund home. We were living in the dark ages back then.” David lived with his mother in their family home until her death a few years back and now is in assisted living near two of his siblings. To this day I still feel great affection for him and the family and am so grateful for the chance to reconnect. Looking at the pictures again I feel like booking a flight to Minnesota.

And now through my sister’s email I’ve met up with her third brother, Bob. . .

. . .who just happens to have pictures I get to add to my collection! I’m a happy camper.

So to continue our photo sharing, I added this picture of me in my centennial dress. 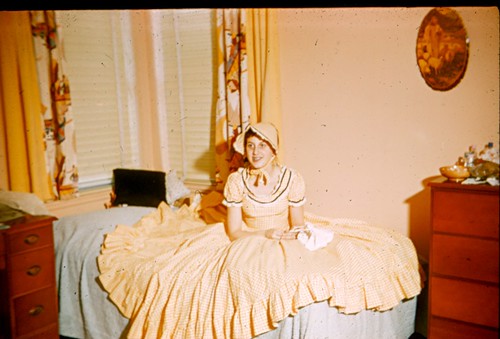 Bob: It is the same…but in color…wow…everything is the same color in your room.

Me: I still love Jesus, but I don’t hang his picture on my wall anymore.

Bob: Wheaton is the place for Jesus. 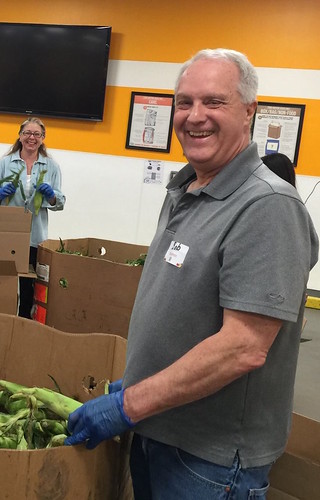 The story wouldn’t be complete without a current picture of Bob. Now that we’re Facebook friends, I hope to get to know Bob as an adult. According to Lon, he’s published a book and is a scientist/inventor. Here he is, working at the food bank.

Time for me to climb down from the clouds now and get back to packing boxes for a home improvement project. Thanks for sharing my joy. I’m guessing you have a similar reconnection story. Tell it to me sometime, OK?

5 Responses to i took a scenic walk down memory lane