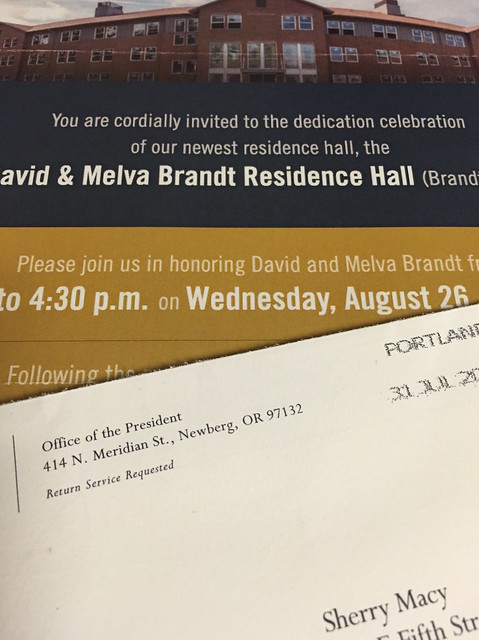 Several weeks ago I was surprised to find an envelope in our mail from George Fox University—addressed to me—not Mauri and Sherry Macy, which has been the case for the past 21 years. My only connection to George Fox is through him. 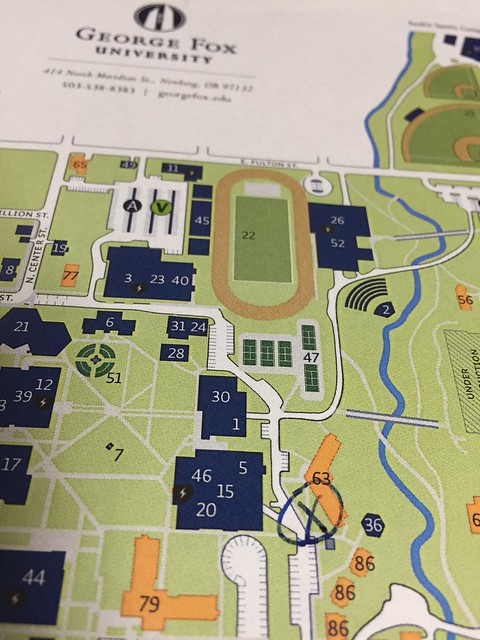 Now and then I think of it when I pass this spot on campus. See the X? It marks the spot where, back in the mid-1960s, Paul Carlson sought a conversation with Mauri Macy, who was a student at Fox. Paul had traveled to Newberg from Wheaton, Illinois, on business, selling college advertising for Campus Life Magazine. The topic of conversation was me. Paul wanted to know if Mauri had any “designs” on me. I guess Paul had heard me talk about Mauri in the couple of dates we had before this business trip, and he liked me well enough to want to assess his competition, if there was any. Mauri assured Paul we were only friends, nothing more.

So, I do have a connection to George Fox University. But that was hardly enough cause to be sent mail to me alone. But then I saw that it was a personal invitation to the dedication of the new student resident hall being named for my friend Melva Brandt and her husband and former GFU president David Brandt.

Now don’t go and get all impressed that I was friends with a college president’s wife.

I took off work and went to that building dedication and sat in the close-up chairs so I could take this picture, 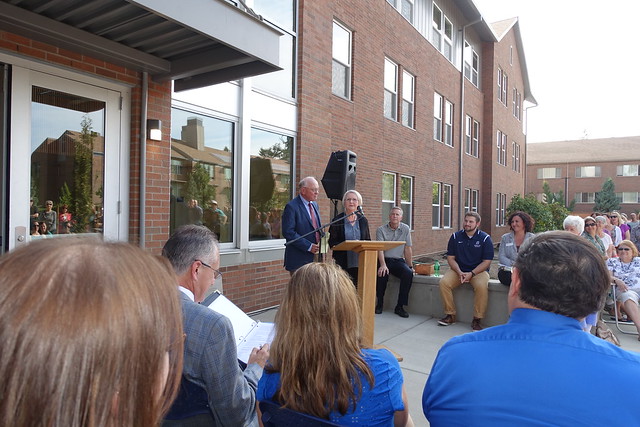 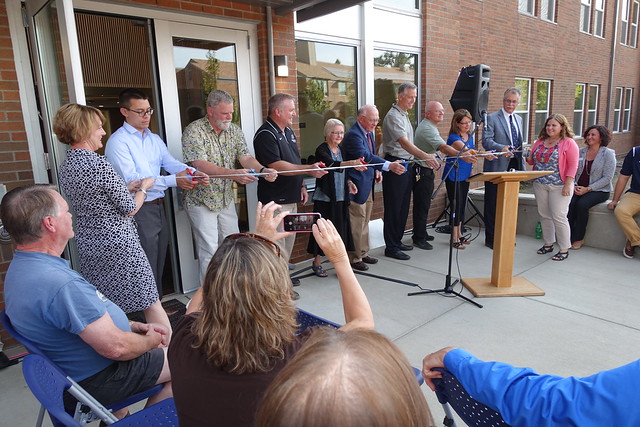 of the ribbon cutting, then later saw this picture on Facebook, 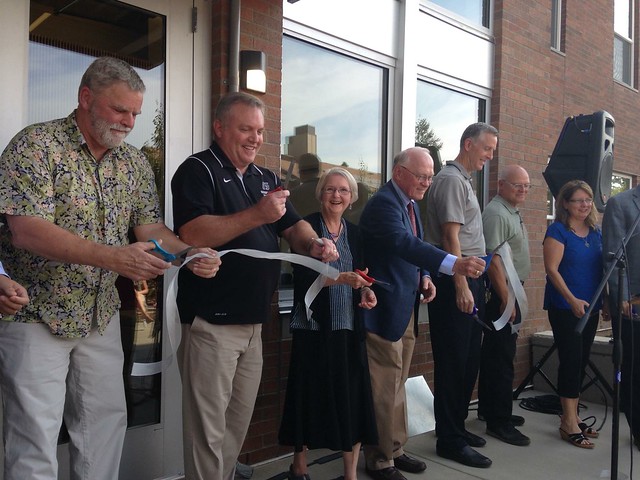 taken by that phone/camera in front of me (credit: Marilyn Lahue-McCully) whose shutter timing was exquisite.

Formalities complete, we were invited to walk the halls and admire the new dorm we’ve been observing in various stages of development from the foundation up, not knowing it would eventually be named Brandt Hall. I bumped into church friends who saw me without the man whose name is usually on the envelope, and their wondering eyes asked, What are you doing here? “I was invited!” I shouted. No, I didn’t shout; I didn’t say a word. But I wanted to because after all, I am friends with a former college president’s wife and that’s why I received a special invitation to this grand event that served chocolate cupcakes with poofy frosting and infused iced teas. 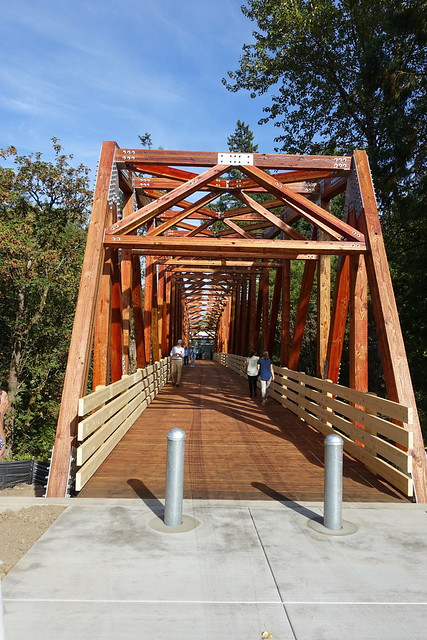 Only a half hour earlier, the newly constructed canyon bridge had been opened for walkers, so of course I had to take advantage of being one of the elite who got invited to test it out first. 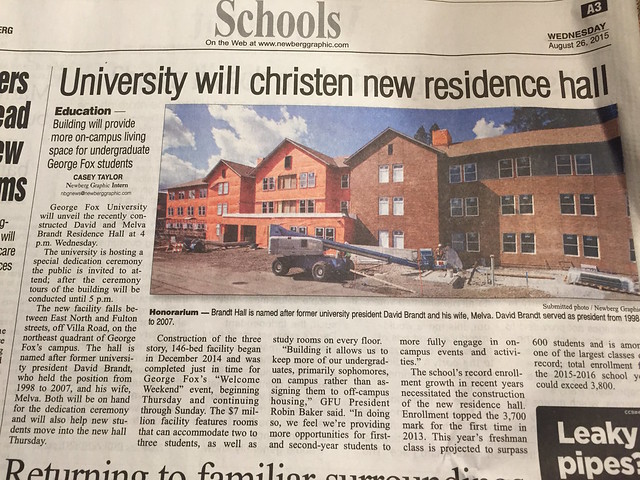 that “…the public is invited to attend.” That loud boom you heard around 5:30 p.m. Wednesday, August 26, was my ego bursting. It’s a good thing ’cause I’m unbearable to live with in that state. 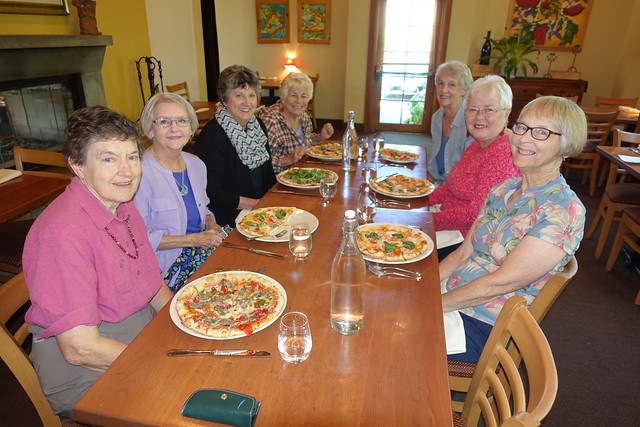 The next day I went to lunch with Melva and some other friends, and we talked about life and real stuff in the manner of real people who don’t put each other on pedestals or think of ourselves more highly than we ought to think.

This entry was posted in family matters, in the neighborhood, old friends. Bookmark the permalink.