i only have two stories. . .this one from a recent retreat

You are used to reading my posts. So for this one I’ll ask you to adjust your frame of reference to a man named Mauri.

It was Friday night…we’d been arriving thru the late afternoon and evening – no supper, so the first time together was the evening gathering. The eighty-five or so men seemed to enjoy being together and sang like it…’nothing quite like men’s voices, and since leading the songs was my assignment, I’ll admit to being a little relieved—unknown group and all.

There was some other talk-talk in the meeting before the speaker…and with him quite a bit more…talk—don’t remember much of it (even tho’ paying careful attention and digging into the youVersion/iPhone Bible when needed). Somewhere near the end there was the familiar promise of just one more story…a reminiscence from the speaker’s years-ago tenure as a youth pastor (that’s – years ago…probably near the same time I was a youth pastor).

His story setting was nighttime on a San Diego beach (up here we have the coast…not so much in California) – with the youth group around a bonfire. At some point one of the kids said, “I did it. I finally wrote that song,” and then sang it. Only one line remained in our speaker’s memory… “the day you no longer burn with love, many others will die of the cold.”

I know that song. From wherever I’d wandered…I was suddenly re…focused. I know that song…and for a long time. I googled the lyric with my iPhone “Bible” and it took me to Francois Mauri*ac (*so’s you don’t miss it) who wrote those words and also to an eponymous album “Random Sample” recorded in the early ’70s by a San Diego-based group called…Random Sample.

It was in the spring of ’72 Margaret-Rose and I went to the Philips Auditorium in Denver where a group called…Random Sample was singing at a Saturday night Youth For Christ rally. You might remember those…rallies. A near hootenanny with at least three acoustic guitars (one a D12/35 Martin), Random Sample was good/memorable—smooth vocals – predictable harmonies…and the lead singer was the guy from the San Diego beach – either Ted Limpic or his brother Gerry. I’m not sure which – but he had a clear voice and played the big Martin like crazy. And one of the songs…the one I never forgot, was the song the retreat speaker quoted…“Love to be Love.”

Don’t you like the way life circles around sometimes? And the men sang that song together the next evening.

Ted Limpic went on to be a life-long missionary with Campus Crusade in South America and then Spain. Gerry did some other recording (one or two albums) and may still be a minister of music in Southern California. I’m betting Ted wrote/played the song:
The day you no longer burn with love…
many others will die____of the cold. (from Mauriac)
Love was not placed in our hearts to stay
Love to be love must be given away…(kind of a Malvina Reynolds reference) 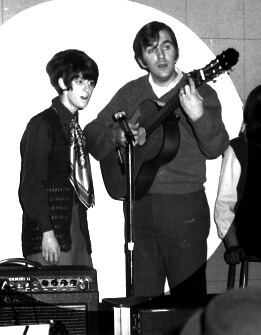 A Martin D12/35 was my first good guitar. I’d been playing for four or five years…mostly on a six-string nylon bought with some college graduation money – and by anyone’s estimation still a fledgling player. The leap from 6-string nylon (playing mostly bar chords) to a 12-string steel was gargantuan…insurmountable. So the very day we went to see Random Sample was also the very day I sold my beautiful (if unplayable…by me) D12/35…only to see one of the Limpic bro’s playing one just like it so very well that very evening. Ironical.

1 Response to i only have two stories. . .this one from a recent retreat