Posted on February 8, 2015 by sherrymacy 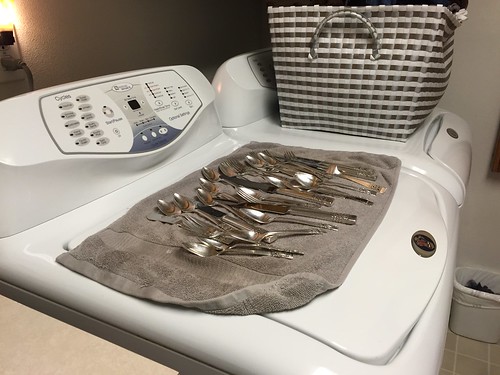 I polished each piece of silver with the final care I will show before passing the 12-setting service on to the newlywed Carlsons. It’s one of the few items of tangible Carlson heritage I have left after many years of deaccumulation. It’s a little harder to part with something that was actually passed along to me by the previous generation, as opposed to by default. The amount of tarnish that had accumulated indicates how little use we have made of it, so giving it to Taylor and Beth will not be sacrificial.

But now it is good for another family’s use. With reasonable care silverware doesn’t wear out.

On the other hand, the washing machine used for my temporary drying station has been carefully maintained, not a scratch on its surface. Under normal circumstances I would have likely used several more layers of protection, but the perfect appearance of our Maytag washer belies the fact that the inside is terribly broken.

These were my musings as I stood in our washin’ room this morning polishing silver because always near to the surface of my thoughts and heart is our Rachel, who, despite her very best efforts to get and stay healthy, is still faced with limited options toward that end.

Today was the day I would have attempted to write an update for the many family and friends who ask how she’s doing. But while I stood in the washin’ room, polishing silver, my phone notified me that she had posted an update on her GoFundMe site.

Since that is a public forum, I will assume freedom to post here what she herself shared. She is so expressive that I know my feeble attempt would have fallen way short. So after I add a picture that she included with her update, I’ll post her words. 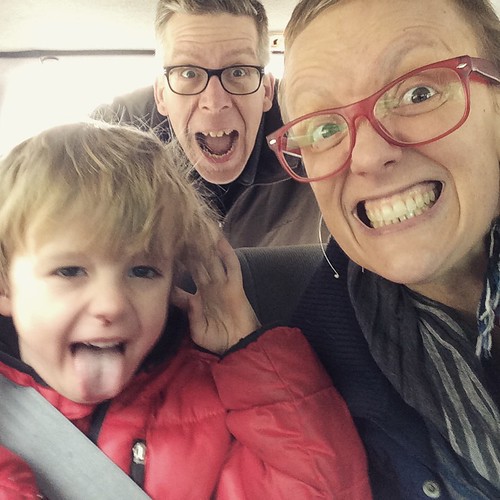 It’s been over a month since my last update. This feels like too long, but I’ve also been waiting for things to “settle in”, and they just haven’t done that yet. So here’s my best attempt to update what’s been going on, where we are right now, and what we are looking toward in the near future.

I started back to work as planned in January. This was exciting and surprisingly energizing to me. It was wonderful (even when challenging) to be back in the classroom working with kids, and it renewed in me the sense that THIS is who I am. In spite of its challenges, I love teaching.

Shortly after my return to work I had another PET scan, which showed that some lymph nodes have slightly increased in size and that more lymph nodes are now “involved”. It also showed very small “spots” of cancer on my liver and one in my lung. This was, of course, NOT what we were hoping to find out. But, my oncologist, always offering me a positive and hopeful spin on things, was ready with a new plan.

There are currently four immunotherapy clinical trials happening at the National Cancer Institute in Washington DC that I may qualify for based on my type of cancer and the treatments I’ve completed up to this point. Dr. Morgan got the ball rolling, and I’ve continued taking the necessary steps to move toward taking part in one of these clinical trials. We won’t know for a few more weeks if I’m accepted. But, if (no, WHEN) I am, it will mean staying at NCI in Washington DC for four weeks to receive the treatment, followed by three or four more weeks recovering at home. This is a very promising option with success rates higher than chemo for the current state of my cancer, and one that is bringing us a lot of hope for the future.

One of the requirements for the immunotherapy trial is that I NOT have had any chemotherapy four weeks prior to the start of the trial. However, because of increased pain (probably due to swelling lymph nodes), Dr. Morgan decided I would have one more “full” chemo treatment (all three drugs) to hopefully help with the pain, and get me through the next four weeks. The day of treatment, he noticed that my “liver levels were high”, which suggested possible liver damage, likely due to all of the chemotherapy treatments I’ve had these last months. We knew “liver damage” could impact my chances of getting into a trial, so we were concerned. The following week, when my recovery from that treatment was far more painful than any previous time, I knew something wasn’t right. I was admitted to the hospital on Tuesday, where the docs discovered a couple of infected lymph nodes had blocked the bile duct in my liver, causing pain and also likely causing my “liver levels” to be so high. A little bit of good news with the bad, as we at least knew I did NOT have liver damage, and Dr. Morgan assured me he would be in touch with NCI to give them this new information. They placed a stint in my liver to keep the duct open, discharged me last Thursday, and I’ve been recovering at home since. I’ve continued to be in a lot of pain, and my mobility is greatly effected. I’m hopeful I will be feeling better in the next few days.

All of this has thrown a wrench in my return-to-work plan, as it will require two more months off from teaching. I’ve been frustrated with having to take off even more days than we’d planned, but thankful again to have the financial resources from this “fund” to make up the difference in our budget. And, once again, I am so blessed to work at a school with such supportive leaders, supervisors, grade partners, and co-workers. With great flexibility and understanding, they’ve helped to revise the original plan, looked into extending long-term disability during another potential absence. They’ve also expressed tremendous hope for my full recovery and strong return to the classroom in the fall.

Phew! I think that’s it on the medical side of things. Too much information, for sure, but much easier to get it all out at once, rather than try and answer the question, “How are things going?” succinctly when I next see you in person.

Some of you have asked after John and how he’s doing with all of this. I asked John what I might say about that in this update, and he gave his usual minimalist response. I can tell you he is hanging in there, continuing to be my dearest friend and partner in all of this. But he does need support too, and people to check in with him. It’s hard to have to be a constant optimist, regular chauffeur, daily chef, house keeper, and often parent a little more than his “fair share”. But he has also found time for what he loves, and continues to draw, paint, and create daily.

Oscar just turned six yesterday, and he is also doing well. He is reading more and more each day, learning to create stories, and gets excited about…well, pretty much everything. My energy level has not been able to match his for some time, and usually he is very understanding about this. Our routines have been thrown off often this year, which is hard for any kid to adjust to, including Oscar. He’s learning to “roll with it” when plans change, which is not a bad life skill for anyone to develop.

We are still daily astounded by the love and support you, our friends and family, continue to show us. Just in care for Oscar alone, you’ve picked him up, dropped him off, invited him to your house, fed him, taken him out for a fun day, helped put him to bed, and loved him a little bit extra. And in care for us as well, with rides, meals, offers to pick things up at the store, help with washing dishes, calls and messages checking in, and letters and cards reminding us of all of the people who are standing in hope with us as we keep moving forward. For that we say again, thank you.

Please continue to…
…Hope and pray with us that I am accepted into an immunotherapy trial as soon as possible, and that the current pain I’m in eases up. Please also pray that while we wait for the trial, any cancer “progress” is slow (or better–nonexistent).
…Continue to remember us with messages of hope and encouragement.
…Consider if you might be able to help while I am in the hospital away from John and Oscar for a month. John will need extra support, and he is not always very good at asking for help.

With so much love and continued gratitude,